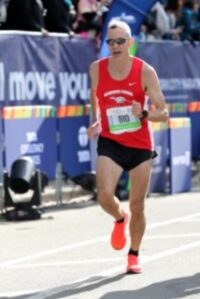 I joined the Hounds in 2019. I now compete in the M55 division. I had been a middle distance runner in the 1980’s under Ted Haydon. After graduate school, I took a couple of decades off, returning to the sport in my mid-40’s. My best race after joining the Hounds was the 2019 Philadelphia Marathon in 3:13:54, which was a 9min PR and a 21min BQ. The result was particularly sweet because just three weeks before I imploded in the NYC Marathon after going out too fast. John then convinced me that I could run a race that matched my fitness with what seemed an insane turnaround time. I ran that race. I have enjoyed running with a team again and being pushed by younger and faster runners. The intensity of the sessions has been a welcome return to the 1980s for me. In a very matter of fact way, you set tough targets and project unwavering belief to those targets.